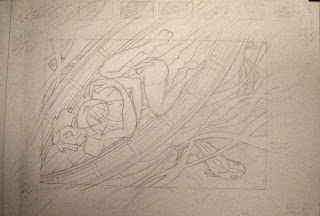 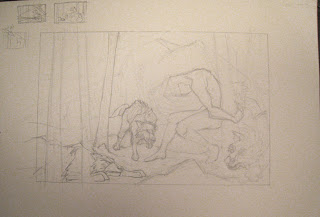 Here are the designs for lino/painting. The second one still has a fair bit of drawing to be done, placing trees in the background and working up the figure, but the first one is all sorted from a layout point of view. I’m going to start with this one and do it as a linocut first, so the next stage will be to define some interesting outlines, currently all lines are the same thickness and it just looks like a cartoon. I want to go for something similar to the Golden Key painting with the lines, adding more lines as texture within the figures themselves, these I’ll cut into the colour on the bodies. Haven’t decided how many colours to print in yet, either two or three (one of which will be the black outline) If it’s three I’m going to do the colours on a separate lino block using a ‘Jigsaw’ method. You carve the block and then cut out the areas of different colour, inking the parts separately you reassemble them (like a jigsaw) before printing from them…the theory sounds good, though I can see it getting messy ;)
Posted by Unknown at 22:36 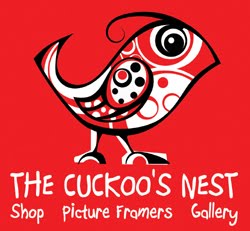